Okay, I admit it, “near death experience” is a tad exaggerated, but it was damn scary!

As most of you know, the first book I wrote was about the abysmal driving standards here in the Philippines. It’s available here if you want to read it. And all my other books in digital format may be purchased here at Books2Read. The paperback and audio book versions are only available through Amazon.

Plug over! 🙂 So here is the story of the carabou., a big heavy water buffalo type thingy. Thay are Big! They are Heavy!

It all happened on a weekend away. A wonderful trip south to Hinobaan,then onward to Bayawan and Siaton. The last named town is the most southerly point of Negros Island.

We meaning me, my wife Zabrina, the two boys, and our helper Daniel, were en route to Bayawan from Siaton. Dodong, Daniel’s brother, was driving. He is a good driver. He must be otherwise I would not have entrusted my car to him. Darkness had fallen and we got stuck behind a slow-moving truck.

My driver signaled to overtake on the two-lane national highway. It was clear. I could see that from the front passenger seat. As we pulled closer to the front of the slow truck – there it was – a carabao. Dark gray in color perfectly blended into the dark of the unlit highway.

“OMG,” I thought and may have exclaimed. I truly thought we were going to collide with the beast and the rice-threshing machine it was drawing behind it.

Coolly and expertly, my driver slammed the brakes and steered to safety behind the truck once more.  Hearts were still palpitating at such a close encounter.

I ask myself, who with any kind of brain would “drive” such a beast at night on a national highway without even as much as a flashlight to warn traffic?

The answer may seem harsh but it’s true – the mass of uneducated, ignorant idiot Filipinos who have no regard for their own safety or the safety of others. It hurts me to say that, but it’s a fact. The incident is sadly typical of so many incidents witnessed every day on the roads of the Philippines.

Having got the “bad stuff” out of the way, allow me to show you the good things that happened on our road trip. It was most enjoyable despite the near death experience.

The boys enjoying the pool at Albors. 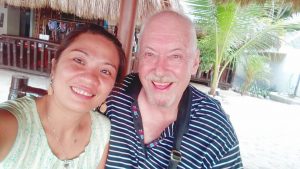 The daughter of Albors’ Owner 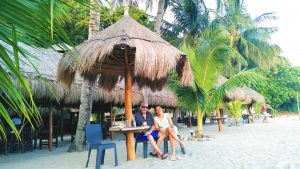 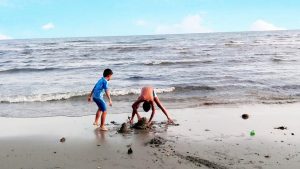 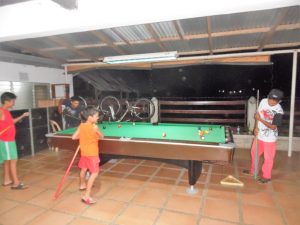 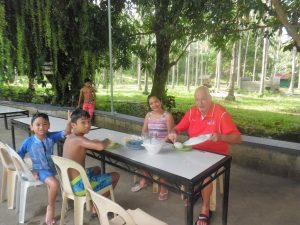 View from the National Highway near Hinobaan 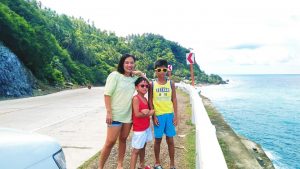 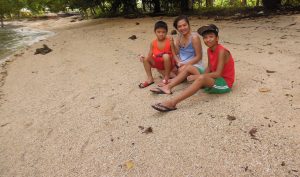 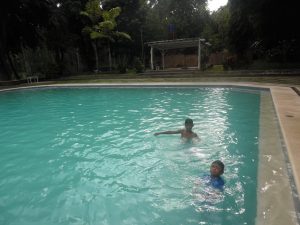 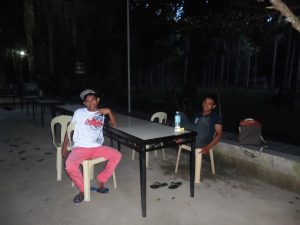 Albors is a great venue. It has a large swimming pool, a restaurant, great food and a warm ambiance. We were lucky as the accommodation is normally not available and only used by members of Alan’s family. Alan owns Albors. But through a friend, we were permitted to use the one room on site and in reality were treated like family.

We had a day visit to Cove Paradise Beach & Dive Resort. It was okay, a relaxing few hours were spent there. For me, the beach isn’t the best. There were rocks exposed at low tide and too much trash. It has a lovely pool and I’m sure the rooms are good as they don’t come cheap. Pesos 5000 ($100) is the price you pay for the most expensive room.

Leaving there, we headed for Bayawan for BBQ on the Boulevard, reputed to be the longest in Asia, The boulevard is lined with many BBQ outlets and further up seems to have some permanent videoke bars. It was on the way there we had the near death experience with the carabao.

I usually drive, but that weekend decided to have someone else do the driving. He did a great job. Thank you, Dodong! LIfe is too short for going head to head with large beasts 🙂