Danielle Des of the Thought Card piqued my interest when I saw that she had crossed New York to buy rainbow bagels. She was telling me how much they cost – Ouch! Mucho $$$$$$ …

Then I found out that a bagel store had opened right here in Bacolod selling rainbow bagels among many other yummy things. I took the family there earlier today to try them out. Good move! The rainbow bagels were delicious and so was the onion and chive cream cheese schmear (dip) that I chose to go with it.  One of the boys had soup. I had a spoonful and that was so tasty too. Not content with that, Zab offered me a portion of her cheese bagel. What can  I say? Yummy, also.

They also do a lighter colored rainbow bagel. 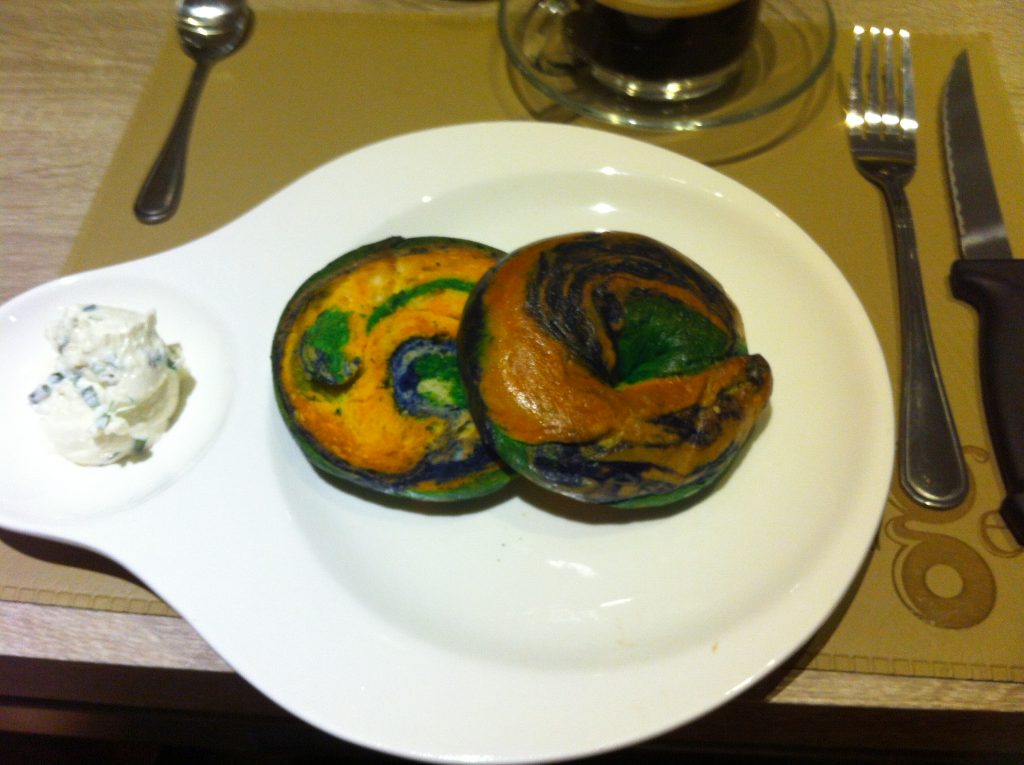 I can see that this bagel store is going to be a regular watering hole. Not only for the bagels, but also for the Eggs Benedict on an English Muffin with Ham or Bacon, not forgetting the Salmon Gravlax on a bagel. I simply adore those two dishes!

Combine all that yumminess with a pleasant ambiance and great family ownership, I can see a booming future for Bagels by ELG in Booming Bacolod. The owners are good people. I spoke with Elsie and found her a pleasant and welcoming host. So too, her son Steve. He makes the bagels and learned his trade in California where they lived for some years before returning to their native roots in Bacolod. Thank you to both of you for bringing bagels to Bacolod!

Turning to Danielle again, look at the menu prices my friend. Better value than New York, don’t you think? 🙂 For your information the store is called Bagels by ELG and is located under the O Residences condo next to Robinsons Mall on Lacson Street.

After that calorific blowout, I just had to take some exercise. I’m a kid at heart 🙂

Published inBacolod LifeFood and Eating Out