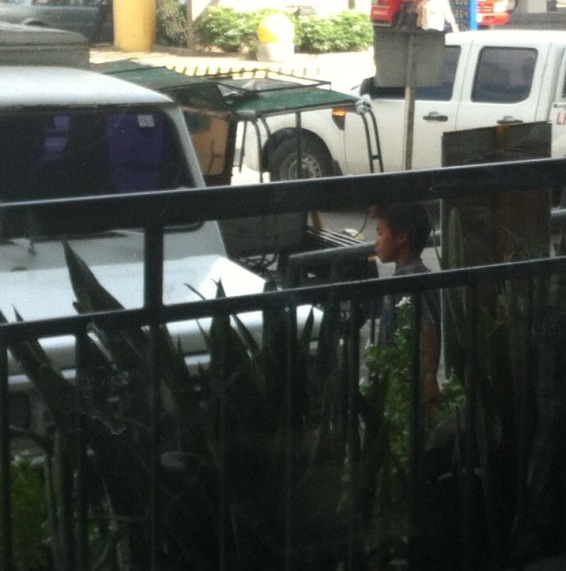 Published by Stephen Bentley on September 11, 2015

She left me with my excellent coffee and a wonderful savory pastry – a chicken and ham pie. It was my merienda time and one of the things I just adore about the Philippines. In case you are wondering – merienda is a snack usually taken between breakfast and lunch then again between lunch and dinner. This was my afternoon merienda. The next hour turned out to be my slice of pie and slice of Philippines life.

I have always been an observer of people. People fascinate me. I love ‘people-watching’! So I spent the next hour or so engaged in my favorite pastimes – looking, observing and thinking. I was lucky, as I was seated next to the large plate glass window with a great view out on to the sidewalk and the busy Circumferential Road.

One activity and one person caught my eye. He was a young street kid about 12 or 13 years old I guess. He was leaning over the hood of a white vehicle that was parked outside the cafe I was seated in. He was vigorously rubbing and scratching the hair on his head. I thought what on earth is he doing. He continued for about five minutes or so occasionally stopping to examine the hood of the vehicle that he was leaning on. Then I saw him collect something so tiny that I was unable to see what it was. He picked it up between index finger and thumb, examined it then seemed to crush it on the hood of the car with his digit. Then I realized – he was delousing himself! The head lice must have been irritating him so much that he had no option but to search for and destroy the lice in his hair.

All of this got me to thinking about the contrasts in society in the  Philippines. There appears to be a high class affluent group, a group of diligent workers such as call center and office workers, then an equally hard working group as in the  jeepney and tricycle drivers. Then there are the street people such as the kid I had been observing. I am not a sociologist and I do not say that this is an exact classification of the strata of society here. For example there are many doctors and nurses here and I do not propose to fit them into any bracket.

The affluent group can be seen in their new or newish SUVs either driving them, or more likely being driven by a hired driver. A new Toyota Fortuner SUV list price for the most basic version is about PHP 1.300,000 (£19,000 or about $30,000). One source has it that the  average hourly pay in Manila is  PHP 250 per hour (£3.60 or $5.55). I am not convinced by the accuracy of that source. I know that many western employers like to hire Filipino remote workers because they can be hired for $1 or less per hour. I am also aware of hard working people who earn less that PHP 20,000 per month.

However from my vantage point I was able to see both my slice of pie and a slice of Philippines life within the microcosm of a one hour time span. These random thoughts were inspired by what I saw from my cafe table.

Bacolod is the major city in Negros Island. The island was recently united as it was previously split into Negros Occidental and Negros Oriental. It is now one administrative region. The island is known as ‘Sugar Island’. Sugar cane can be seen growing everywhere  on the coastal plains as well as the more hilly regions. The trucks I saw passing by loaded with bales of sugar cane were a reminder of this island’s main cash crop. The cane was on its way to a milling factory.

On average, a sugarcane worker earns a little over $3 US a day, less than half of the government mandated minimum wage. A seasonal worker earns roughly $2 according to a 2014 report. It is also seasonal work as the cutting of the cane and loading on to the trucks takes place usually from October through to the following  March.

The constant procession of these sugar cane trucks is a vivid reminder of the history of this island.

I took all the pictures from the cafe using my phone. The picture of the cement truck reminded me of another feature of Bacolod life. No matter where you live you are bound to notice some kind of construction work being carried out. Home owners are renovating houses, construction workers are building homes and new commercial buildings and roads are constantly in the process of being upgraded. The city’s 2015 slogan is “Booming Bacolod’ and the construction work is living proof of that boom.

The yellow jeepney is a reminder that most Filipinos rely on public transport to travel locally. It is a cheap form of transport and supplemented by the army of motorbike tricycles  and the push bike variety of the tricycle.

There is the pedal powered tricycle in the picture above. The white-shirted armed security guard can be seen in the background. Like many of his colleagues he has a pump action shotgun slung across him. His semi automatic pistol is also holstered at the hip. This common sight is a reminder that guns are a way of life in the Philippines. However, as a foreigner living in the Philippines I have never personally witnessed any violence or indeed any form of criminality. I find the juxtaposition of the ubiquitous armed guards and the happy cheerful Filipino nature to be a source of mystery to me. I am not naive and do understand that crimes do happen here but it’s not ‘in your face’ like the British culture I was accustomed to. In fact rarely does one see Pulis (police) present in the street or even driving police cars along the highway. Notwithstanding that, security is an ever-present feature of life here. Many sub divisions have security at the entrances and mine also has CCTV cameras installed. Most residential homes are gated with heavy cast iron contraptions and many a boundary wall is topped with broken glass and razor wire. My neighbor has a sign affixed to his boundary fence warning that, “Trespassers will be Killed”!

I was then startled out of my thoughts when Zabrina returned to the coffee shop. It was time to leave. I enjoy the better aspects of the American legacy here and one of them is the bagging service in the supermarket. The staff usually push your shopping cart to the car as well as bagging it up and loading your cart. And when you reach the car they invariably load your heavy bags into the car for you. Unlike the American way, the young man who has just helped you will refuse a tip! They explain that it is against company policy!

So here we are in the car now having to back out into the now very busy Circumferential Road. Suddenly from nowhere appears my little street urchin, now deloused, stopping traffic with his hand aloft in order that I may safely back out. I do so and power down my window. I hand him some small change in coins. He does not have a company policy so he accepts the donation. That is how he manages to put rice in his stomach on a daily basis.