British Barristers and Those Funny Wigs

Published by Stephen Bentley on September 13, 2016

In answer to a query from a Filipino friend, I said that I used to be a barrister. She looked puzzled for a while then exclaimed, “Right! Got you, those funny things on their heads. What do you call them?” The answer was wigs.

Yes, that’s me in 1997 the night I was “Called to the Bar” of England and Wales. The wig often became unbearably hot and stuffy even in an air-conditioned court room. As my confidence grew, I often would remove it to scratch my head to relieve the itchiness caused by the real horsehair material.

The history of the Bar in England is an ancient and rich tale. You can read about it in an American Bar Association (ABA) publication for free by following this link.

The picture of me above was taken in Middle Temple, one of the historic four Inns of Court. It has strong links with both the ABA and indeed America itself. It was barristers from this Inn who helped to draft the constitution of the United States of America.

Following severe bomb damage to the Middle Temple building in WW2, the ABA paid for the restoration of a screen in the hall. The photograph below shows me in front of a painting depicting the damage inflicted by the Luftwaffe. 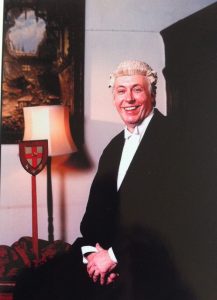 Despite the irritations caused by the horsehair material, the wig had some good uses. It preserved anonymity to a degree and it also permitted the human being inside the garb to easily adopt a persona fitted to the occasion. Most of my advocacy was in the criminal courts. Most of the time I was defending a client accused of the most serious of crimes and loss of liberty was at stake for most of them.

So, although humor has its place in the court room, it was for the most part a deadly serious procedure. The anonymity aspect of the wig served me well on one occasion.

It was during a trial at the famous Old Bailey. I was defending a man accused of a burglary (home invasion) at the home of a professional woman. She was pistol-whipped and subjected to a sexual attack.

As a professional, I had my instructions from my client and I cross-examined the woman victim as per those instructions. That was my duty as the advocate.

I bumped into the woman at the lunch break as I was leaving through the main court room door. She glared at me with a “looks could kill” stare and muttered “piece of shit.” I am still unsure whether she was referring to me, my client or both of us. That treatment comes with the territory. It’s not personal for me but extremely personal for the victim and my client.

The point is that I doubt whether she would have recognized me if this had been a street encounter and I had been “undressed,” simply wearing my suit, shirt and tie.

The last point is also underlined by the south London judge I used to chat to on our walk from the Tube station to the court house.  We were always both in our “civvies” and I always thought that he was unrecognizable from the man who sat in court dressed in his wig and robes.

There was one other thing that made him unrecognizable. I discovered he had a wicked sense of humor because of our stroll and casual banter.