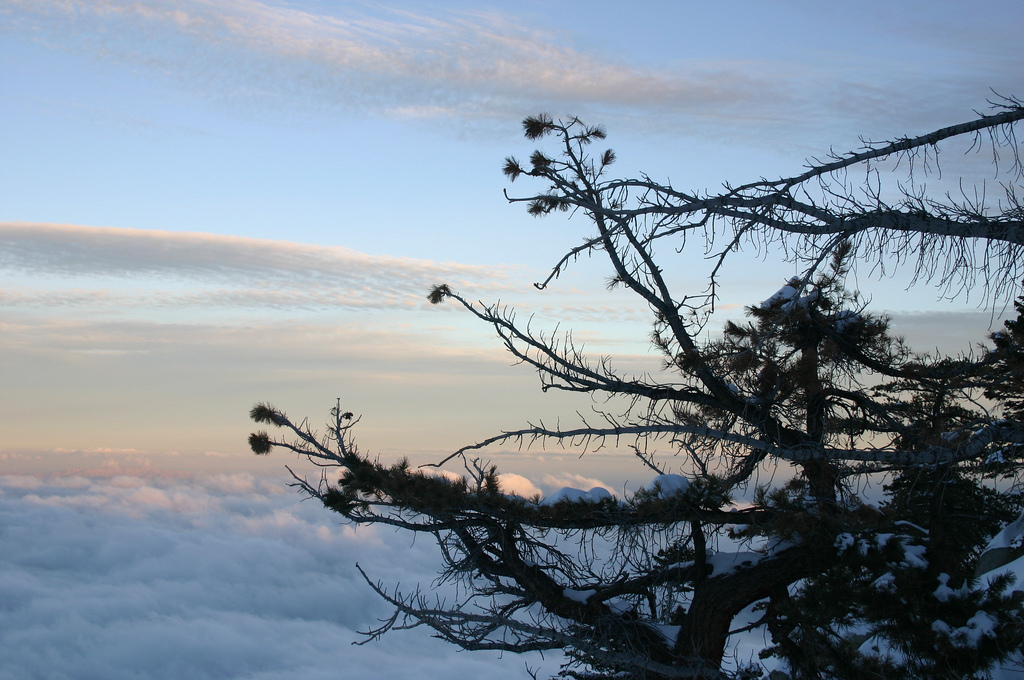 Nature is the theme of this week’s #FavFotoFriday series. Thanks once more to Sandy of Scribbles and Musings for inspiring me to run this series.

For the purpose of today’s post the meaning of “nature” will be given a broad interpretation.

The above picture was taken looking out to Navarre Beach on Florida’s Panhandle coast. It was the onset of a tropical storm. One moment the sky was blue and a typical fine Florida day, then everything suddenly went black as if there had been an eclipse of the sun. There was not a breath of wind and the birds stopped singing. It was eerie and a reminder of the power of nature.

The pelican was probably hungry! It appeared to be waiting for the fisherman to reel in a catch before making its own move. The picture was taken at Mandurrah in Western Australia and demonstrates the proximity of man and nature.

The last picture (above) was taken from the cabin of an aerial tram car near to Palm Springs, California. I didn’t believe it was possible to see snow in the desert! (there is some melting snow left on the tree branches) The rotating  aerial tram car travels from the floor of the Coachella Valley to relatively near the top of San Jacinto Peak.

Wikipedia has this to say about the tram car – the twelve-and-a-half minute ride begins at the Valley Station at 2,643 ft (806 m) and passes up North America’s sheerest mountain face through five life zones (biomes) on its way to the Mountain Station  at 8,516 ft (2,596 m) above mean sea level. Travelers start in the Sonoran Desert and arrive at an alpine forest.

The floor of the 18-foot-diameter (5.5 m) aerial tramcars rotates constantly, making two complete revolutions throughout the duration of the journey so that the passengers can see in all directions without moving. With a maximum capacity of 80 passengers, it is the largest of the three rotating aerial trams in the world. The other “Rotair” aerial trams are located in Cape Town, South Africa and Titlis, Switzerland.

Passengers disembark at the Mountain Station in the alpine wilderness of Long Valley and Mount San Jacinto State Park. The air can be as much as 40° F (22° C) cooler at the top than in the desert. Visitors can walk along nature trails, take a donkey ride, or play in the snow during the winter months. Back-country hiking can be done with a permit from the U.S. Forest Service. There are two restaurants at the summit, one of which specializes in fine dining. Both stations have gift shops specializing in Aerial Tramway-related merchandise as well as educational toys. A video presentation of the history of the attraction plays continuously in a theater at the Mountain Station. It was produced by Palm Springs television station KESQ-TV with voiceovers provided by Palm Springs radio personalities.

The view at the top can stretch northward for more than 200 mi (320 km) on a clear day, all the way to Mount Charleston north of Las Vegas, Nevada. Views to the east and west can stretch as far as 75 mi (121 km). California’s Salton Sea is plainly visible to the southeast.

To view all posts in the  FavFotoFriday  series, click on the link to your left.  Photos featured  in the series can be viewed by clicking on that link. They can also be viewed on Flickr and most were taken using  Canon camera and lenses. To those of you who are keen photographers, the full data and EXIF is displayed on Flickr. If you require any download of any images please contact me as ©All Rights Reserved.

[Disclosure: As an Amazon.com Associate and eBay partner, I choose to promote Canon photographic equipment. I swear by the brand. I earn a small commission by referring you to the stores, but only if you buy as a result. There is no additional cost to you as a customer. Why Amazon and eBay? Choice! eBay is where you can pick up bargains in auctions if you shop wisely. And, many people don’t realize you can buy new, used and refurbished on Amazon.com]