Published by Stephen Bentley on April 8, 2016

‘Grass Roots Football’ is a joy to watch. You can see kids playing the game as it was intended. With joy, passion and in the right spirit (mainly). You can also witness the skills of the ‘beautiful game.’

One of the many pleasing aspects of life here in Bacolod is a thriving football community. I have had the pleasure of meeting local coaches like Robel Ramos of Bacolod and Coach Eleazar of Cebu. They have a passion for the game that is passed on to the youngsters. Thanks to the two of you and all the other coaches throughout the world that give up their own time to provide this service. The shot above is a study in concentration. Note the sucking in of air as the taker of the free kick takes aim. The picture above is focused on the crowd leaving the two boys playing the game out of focus. I’d like to say that was deliberate. It does show that the crowd are concentrating as much as the boys on the park. 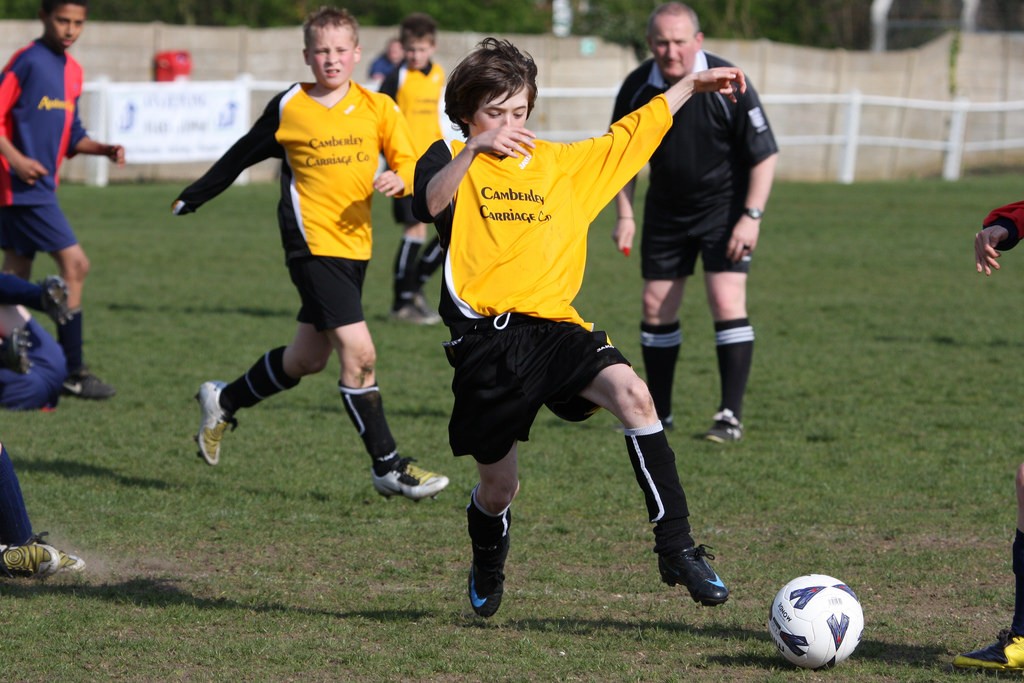 The referee is also concentrating ready to blow his whistle in the event of a foul. It’s good refereeing as he can see the boy in yellow is lunging into an opponent. Happily, there was no contact between the two players and the ref rightly lets play go on. The above shot shows the influence of top players on youngsters. The outstretched arm gesture by the player in the red/blue jersey is typical of that seen every week in the Barclays Premier League and the top leagues in the world. Fortunately, the boy in yellow ignored it and they got on with the game.

Football is a game I love. I miss playing it. As a kid, I was kicking a ball every day, five days a week, fifty two weeks of the year.

It’s good to see kids these days playing sport. I didn’t have the distractions that they now have. In my day an apple was for eating. A tablet was what the doctor gave you. Football was virtually unheard of in the United States. Who knows? Perhaps cricket will catch on in the States 🙂

You have two sides, one out in the field and one in. Each man that’s in the side that’s in goes out, and when he’s out he comes in and the next man goes in until he’s out. When they are all out, the side that’s out comes in and the side that’s been in goes out and tries to get those coming in, out. Sometimes you get men still in and not out.
When a man goes out to go in, the men who are out try to get him out, and when he is out he goes in and the next man in goes out and goes in. There are two men called umpires who stay all out all the time and they decide when the men who are in are out.
When both sides have been in and all the men have out, and both sides have been out twice after all the men have been in, including those who are not out, that is the end of the game!

All of the above photos were taken with my Canon EOS 40D camera.

For Philippines Customers Only