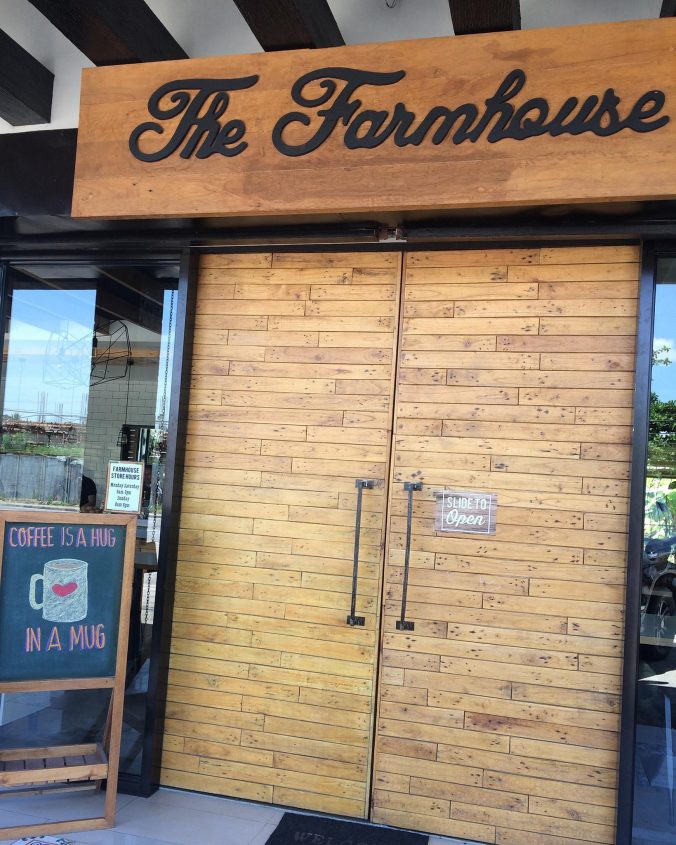 The Farmhouse at May’s Organic Garden in Bacolod is a little gem. As the name implies, the food is all organic and natural ingredients. It was a busy Sunday and this place wasn’t our first choice but I am so pleased we ended up there for lunch. It was busy out on the roads owing to huge swathes of Bacolod City being subjected to a scheduled brownout (power outage) for maintenance purposes. First we went to Punta Taytay to try one of the restaurants specializing in fish. But they were ridiculously busy and the one we did go into did a nice line in loud “boom boom” music. If you can call it music! No thank you so we turned around and headed back through Sumag… Read More You can call it fishy if you like but there’s nothing fishy at all about two of Bacolod’s finest fish restaurants. They are Diotay (pronounced Joetie) and Ading’s. Zabrina and I had the pleasure of lunching in both recently on separate days of course 🙂 There isn’t much to choose between the two but they are very different in some ways. Diotay’s is in  Luzuriaga Street and is more humble and basic than Ading’s but it makes up for it in fast service and the quality and freshness of the seafood is fantastic. It is a little less expensive than Ading’s but most locals will tell you the latter is too dear. I’m not having that as the difference in price is not phenomenal. When… Read More Following my recent post about rainbow bagels ‘g’ wrote in with a comment. That comment was in response to the comment left by Danielle of The Thought Card blog. ‘g’ is a regular contributor to this blog both with comments and short stories. I thought it best to turn this last comment by ‘g’ into a post as it is worthy! In reply to Danielle Des. Hartford, Connecticut is where I first experienced bagels. I am not talking about New York Style bagels you buy in the supermarket. Or those ridiculous excuses for using the name bagel as in bagel chips. I was selling shoes in Hartford. My boss invited me to lunch at a deli known for its pastrami. While we waited for our… Read More Danielle Des of the Thought Card piqued my interest when I saw that she had crossed New York to buy rainbow bagels. She was telling me how much they cost – Ouch! Mucho $$$$$$ … Then I found out that a bagel store had opened right here in Bacolod selling rainbow bagels among many other yummy things. I took the family there earlier today to try them out. Good move! The rainbow bagels were delicious and so was the onion and chive cream cheese schmear (dip) that I chose to go with it.  One of the boys had soup. I had a spoonful and that was so tasty too. Not content with that, Zab offered me a portion of her cheese bagel. What can  I… Read More 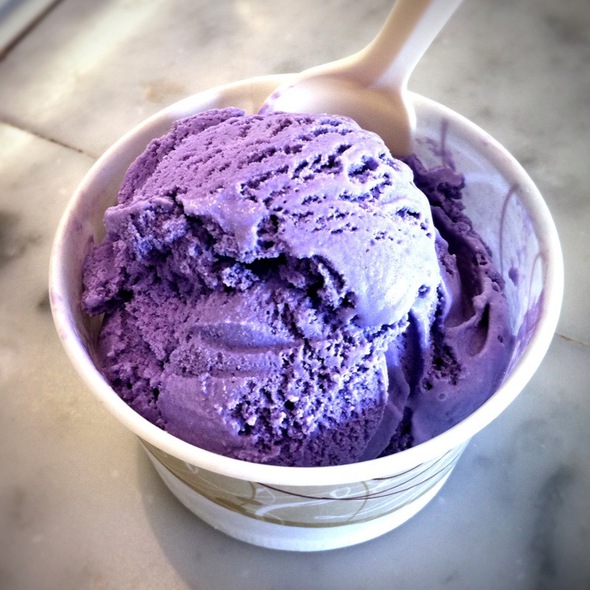 Ube in the Philippines

Ube in the Philippines is everywhere! You could say it is ub(e)iquitous 🙂 When I first arrived in the Philippines, I thought what the heck is that purple stuff in the bowl of ice cream! How can anyone possibly eat food full of coloring additives and dyes? But it’s a natural plant and actually tastes pretty good. What is Ube? Its Latin name is dioscorea alata.  Ube as it is known in the Philippines is a purple yam. It is used in a variety of desserts, as well as a flavor for ice cream, milk, Swiss rolls, tarts, cookies, cakes, and other pastries. In the Philippines, it is often eaten boiled or as a sweetened jam called ube halayá; the latter is a popular ingredient… Read More Piaya [pee-i-ah] is a Negrense delicacy and one of the many things I love about living in this part of the Philippines. It is a specialty of Bacolod in Negros Occidental. That makes sense as Negros Island is known as the Sugar Bowl of the Philippines. I am equally as fond of Eccles Cake, a delicacy originating in my native Lancashire, England. What is Piaya? Piaya is a muscovado-filled unleavened flatbread from the Philippines especially common in Negros Occidental where it originated.  It is made by filling dough with a mixture of muscovado and glucose syrup. The filled dough is then flattened with a rolling pin, sprinkled with sesame seeds and baked on a griddle It is delicious and ideal with coffee. I often eat it… Read More My recent post Hey Carol – Forgot the Sunday Roast? provoked some responses particularly about Yorkshire Pudding. It also made me ravenously hungry thinking about a typical British Sunday roast dinner. The thought struck me that many people outside of the UK have possibly no idea a) what a Yorkshire Pudding is and b) how to make one or several, if you have a few mouths to feed! So here goes – Here is what Wikipedia says: Yorkshire pudding is an English side dish made from batter consisting of eggs, flour, and milk. The dish is sometimes served with beef and gravy and is a staple of the traditional British Sunday roast. It may also be served as a dessert. Originally the Yorkshire pudding was eaten on its own… Read More 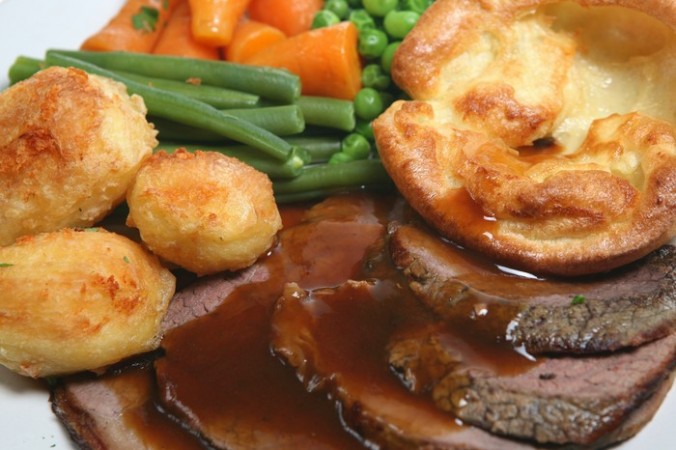 My  blogging buddy Carol of Writeful Mind very recently wrote about the things she most missed about the UK.  She is a prolific writer, a Mom to two kids and a life coach to boot! Although a native of Nawlins (New Orleans) she lived for some years in the UK. After she had posted her list of things she missed most about the UK she kindly invited me to chuck in my two bob’s worth. You can read her full list by following the link above. I agree with every single one of them. When I added my initial comment on Carol’s blog I suddenly realized I had forgotten one important thing. I hastened back and added a postscript to the effect that I missed the NHS…. Read More Zabrina’s Pinoy Banapple Chocolate Ice Cream Cake Or Pineapple and Banana Churla !!! hahahahah… Banapple? Banana and pineapple of course ! 🙂 The subtitle of this wonderful ice cream cake probably needs an explanation especially if you have no gay friends ! Churla is a wonderful word often heard used by gay people in the Philippines. It means “whatever” or is a generic word used to describe (or not) a particular thing that the speaker is struggling to find the correct word for ! Zabrina has many gay friends and the word has remained in her vocabulary to be trotted out at every opportune moment.  She even has me saying it now – much to the amusement of her Filipino friends both gay and straight… Read More Zabrina’s Pinoy Crema De Fruta Dessert Yet another simple to make but delicious Filipino dessert from Zabrina. All these recipes are inspired by her childhood days in Canetown, Victorias, Negros Island when Papa would make these desserts to thrill the kids. As a British expat here in the Philippines Zabrina’s desserts certainly thrill me and our kids and family. Papa must look down from Heaven and smile! Ingredients For at least 15 servings 1 large can (550 g) fruit cocktail 2 packs (200 g) Graham Crackers (British Digestive Biscuits) 2 packs whipping cream or all purpose cream 1 can (300 ml) condensed milk 1 pouch unflavored gelatin powder (optional) Method Drain the can of fruit cocktail and reserve the juice Pour the heavy whipping cream… Read More