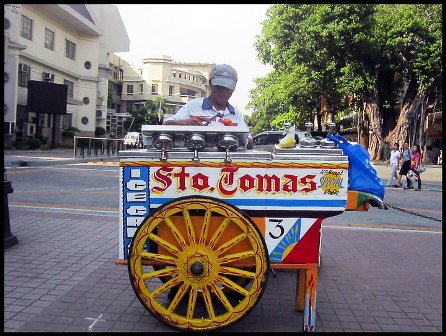 Dirty Kitchen! Is that Where you Eat Dirty Ice Cream?

Any foreigner new to the Philippines whether tourist or not will soon hear the terms ‘dirty kitchen’ and ‘dirty ice cream.’

It was during my house hunting that I first heard ‘dirty kitchen.’ I was genuinely puzzled. The words were uttered with pride and an inner satisfaction which added to my puzzlement. How on earth could someone be proud of a ‘dirty kitchen’? It conjured up images of cockroaches and rat infestation in my western head. Thank goodness I could not have been any further wide of the mark.

A ‘dirty kitchen’ is such a great idea. It is practical too. I’m sure its origins lie in the days when all cooking

was done on an open fire fueled by wood or maybe coal if available. There was no bottled gas or electric stoves back then. 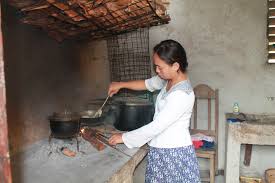 Many Advantages of a Dirty Kitchen

The first advantage of the outdoor cooking is safety particularly if an open fire is used, as it still is in many areas of the Republic. I have heard it said that it derives its name owing to the fact that dirt or soil was used as the base for the open fire. The other fairly obvious advantages are that it isolates cooking smells and smoke from the inside of the home.

Many Filipino dishes are fried in oil in the stove top pan. Fried fish will stink the house out if not cooked outside in the dirty kitchen. A bonus is that the heat generated from the cooking is also kept outside. A factor not to be sniffed at in a tropical climate

Another way of looking at the dirty kitchen is that it is a bit like an outside BBQ area with the emphasis on practical as opposed to some of the clinically clean BBQs I have seen in the United States. I have seen outside BBQ areas in California that would put a top class restaurant kitchen to shame with the amount of stainless steel used!

You will find the dirty kitchen in both rural and urban areas of the Philippines. The rural version will more than likely be the wood fueled variety with the likes of mango trees, coconut shells and talisay being the mainstay of the fuel. It is said that the wood adds flavor to the cooked meat or fish. That is easy to believe. The urban cousin will invariably be fueled by gas hooked up to a two, three or four burner stove.

Like a ‘dirty kitchen’ the term ‘dirty ice cream’ was new to my foreign ears. Once again I was thinking who would want to eat contaminated ice cream? The ‘dirty ice cream’ man or sorbetero can be regularly seen on my sub division as he pedals his bicycle and rings his hand held bell to announce his presence. A more pleasant sound than the monotonous chimes heard coming from the ice cream vans to be found all over the UK.

Sorbeteros are also to be seen pushing around their brightly colored carts. Whether cart or a bicycle the ice cream

will be kept cold in a metal container using shaved ice and salt to keep the temperature as low and as long as possible. Your serving of the cooling dessert could be in a cup, cone or even in a bread bun.

On speaking to the older generation here I discovered the process of making the ‘dirty ice cream’. Or at least how it used to be made. It involved the use of a wooden bucket filled with ice. Inside that bucket was a metal cylinder that contained the liquid ice cream ingredients. The cylinder was connected to a handle which was turned by hand until the mixture reached its desired consistency. The turning would take an hour or so of churning therefore it was common for all the family to lend a hand.

The Philippines is noted for its variety of ice cream flavors and some of them are really traditional – mantecado (Spanish crumble cake) ube queso helado (a kind of iced cheese with the distinctive purple coloring of ube), pinipig (a topping made from rice), nangka (jackfruit) and salted caramel.

The traditional basic ingredients of true ‘dirty ice cream’ are carabao milk and eggs. Coconut milk and cassava flour are commonly used to give it a distinctive flavor. The homemade variety of ice cream is known as ‘dirty’ to differentiate it from the store variety or ‘clean’ ice cream. I enjoy ‘dirty ice cream’ but must admit to some trepidation on my first tasting. I survived and I am sure you will too.

The answer to the question in the title is entirely up to you. I am sure you will enjoy the products of both the ‘dirty kitchen’ and ‘dirty ice cream’ where ever you eat!