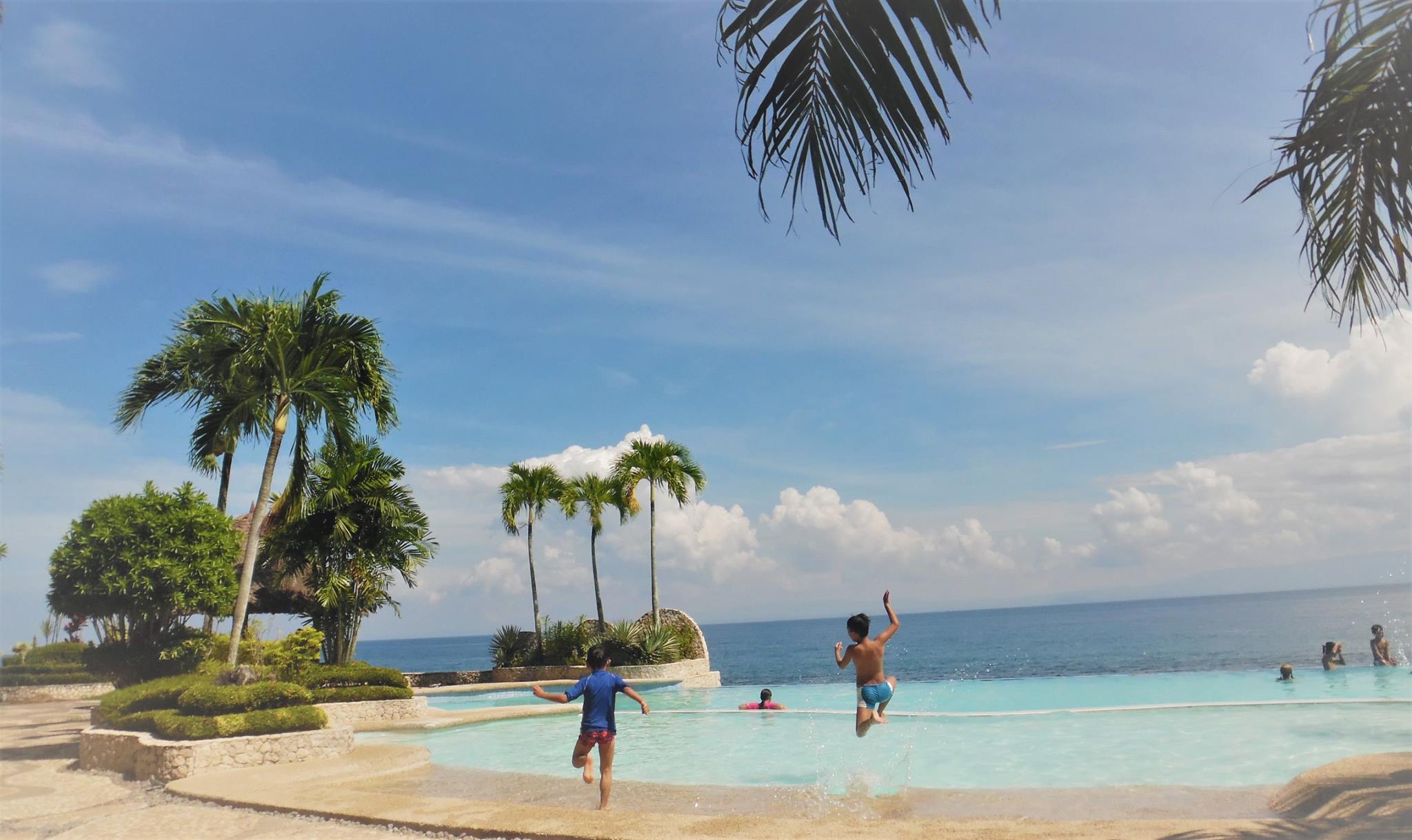 Published by Stephen Bentley on December 22, 2017

Happy Christmas to all of you! I’m sorry I haven’t posted in a while. My writing and other book-related activities such as book reviews took up so much time lately and are likely to do so in the foreseeable future. I’m sure that many of you who receive my monthly newsletter will already have guessed that for the newsletter includes posts from this blog and from my author website.

One of the beauties of living in the tropics is the ability to go to the beach all year round. The temperatures don’t vary much through the year, a usual high of about 32C with a low of about 26C. Just watch out for the two distinct rainy seasons and the occasional typhoon!

As much as I used to like winter city breaks when living in the UK, I didn’t like freezing my balls off in Brussels, Gdansk, Tallin, London, Paris or the other many European cities I have visited.

At my age, it’s better for my old bones to feel the warmth of the sun and dress in shorts and tee rather than coat, hat, scarf, and gloves.

So, with family in tow, we set off for Dumaguete in Negros Oriental some 230 clicks or so from Bacolod. We drove the western route via Kabankalan and Mabinay setting off early to miss the worst of the traffic around the southern fringes of Bacolod and places like San Enrique.  First stop was breakfast in Mabinay before we continued up, over, then down the mountains to Bais City then Dumaguete.

First night was to be spent in Siquijor so we needed to find somewhere to park the car as we needed to catch a ferry for a one-hour trip across to the island of Siquijor. Zab asked the locals and we found a car park that used to serve as the old bus terminal only a few hundred metres from the ferry port. Pesos 200 ($4) for  a secure parking area was fine.  Then we bought our tickets and sailed across to the island.

We had made a reservation for one night only at the Charisma Beach Resort and we soon found a helpful and friendly tricycle driver who transported us to the hotel. We also arranged for him to collect us the next morning to give us a guided tour of the island. All the prices are set by the local government so there was no fear of being ripped off. He was there waiting for us at 9 am the following morning as planned.

I can’t hand on heart recommend the resort. It was okay but nothing special. I can’t really put my finger on what I didn’t like about it. Let’s just say it had a strange vibe. It didn’t help that the walls are thin and even though we had a self-contained family room, there were loud noises emanating from the room next door but separated from us by about two metres. The noise clearly came from a woman who seemed to be auditioning for the lead female role in When Harry Met Sally. You know the bit I am referring to 🙂

We had dinner and breakfast there and the food was adequate. The best bits of the resort were that it is right on the beach and also has a pleasant swimming pool area.

The tour of Siquijor island was the high spot of this mini-vacation. It is a simply beautiful place and so clean. The only downside, for me, that there were too many foreign tourists, mostly thirty-somethings, who appeared to know everything and were most unfriendly. I hope the island does not become spoiled or another Boracay. There are signs of it happening. There are already too many sports bars and other establishments catering to western tastes. Why travel to Asia to watch European and American sports, eat faux European and American food? I don’t get it.

Alas, our time on the island was all too short. We had reservations in Dumaguete for our second and third nights away so it was off to the ferry once more for the trip back.

On arrival back at the port we went to our secure parking area to collect the car. It was filthy owing to the rain we had encountered on the journey from Bacolod. One of the guys manning the car park produced a pail of water and cloth helpfully washing the windshield and rear window as well as the headlamps. I was grateful because it was now dark and he was also grateful to receive a tip. Happy Christmas!

A short 15-minute drive brought us to our hotel, Go Hotels adjacent to Robinsons Mall on the Dauin side of Dumaguete. The Go Hotels chain is operated by Robinsons and they are all modern, no-nonsense budget hotels with the business traveller in mind. They are not the type of places that we like to stay but there was a promo of a 2-night stay, 2 rooms, for Pesos 500 ($10). We made the reservation one year in advance. It was a great deal because the place was more than adequate for our needs and at that price… we could not refuse the offer!

Our first full day in Dumaguete was a busy one. Zab and the boys had breakfast at the nearby Jollibees (in Robinsons Mall) before we set off for Tierra Alta Resort perched up in the mountains near Valencia and about a 45-minute drive. What a beautiful resort! It has a Greek theme, has its own clubhouse and huge swimming pool. It is set in a high-end sub-division with full security. We ate lunch there and the standard of food, but not the prices, was high. It rained. After all we were high in the mountains so we set off for beach and dive country at Dauin.

I guess it was an hour to drive. The sun was out again as it had been all the while we were in Siquijor. We found a resort beer garden with BBQ area right on the beach. The boys were happy swimming in the ocean and playing in the sand though it is a coarse brown sand. 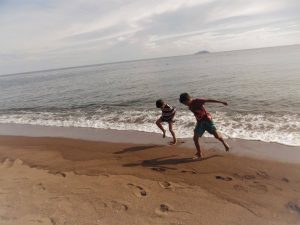 We drove back to the hotel, showered, rested up some then went out for dinner. It was easier to get a tricycle than drive so that’s what we did.

I do appreciate the tricycles in Dumaguete, Negros Oriental and Siquijor. They are so much bigger and with a higher roof than the type found in Bacolod. I can get in and out! We wanted to eat at Lantaw as we had heard good things but on arrival there we found we really needed a reservation so we walked around the corner to Hayahay where we had eaten on our last visit to Dumaguete.

The strange thing about Hayahay is I am never sure if we are there or in Lab-as Seafood Restaurant. They both seem like the same place to me but the latter, as its name implies, specialises in seafood and that is what I ordered. It was a steamed grouper and delicious cooked with ginger, garlic and onion.

Meal over and time to go back to the hotel. We left the hotel about 9.30 am the following morning and decided to keep the boys happy with a breakfast at the nearby McDonalds. I made sure I had the sausage and egg McMuffin as I had not had one for nearly the last three years. I don’t mind if it’s another 30 years before I have the next one. Time to drive home to Bacolod! This time we drove up the scenic coastal route through Bais City until we got as far as La Libertad. There we stopped at the delightful LaLimar Resort for a decent lunch and the boys swam in the pool. They loved it there and it is a nice place. We plan to return there some time.

Further up the coastal highway we made a left at San Carlos City and on up through the mountains to DS Benedicto. We were all tired when we got home but it was a great short break.

There is very little to choose between the west coast and east coast routes between Bacolod and Dumaguete. The eastern route is about 20 kilometres longer but is a more pleasant drive with ocean views aplenty. You also miss the slow traffic in places like San Enrique and Himalayan City not to mention the bottleneck of Sumag just south of Bacolod.