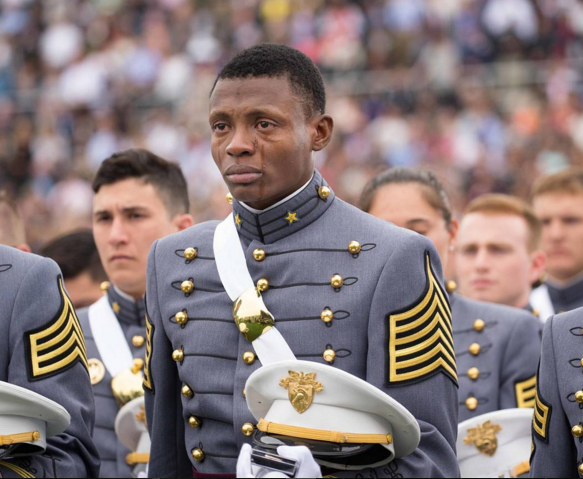 Happy Saturday to you all! Saturdays used to be the happiest day of the week for me as a young guy. Played football in the afternoon and had a few beers with my mates in the evening. Sometimes it involved watching Liverpool FC instead of playing. And, occasionally the enjoyment of a few beers was added to by an interest in a young lady 😉

Life is way too serious now. So let me bring you a story that’s bound to make you happy and it’s also an inspiration to all.

This article first appeared in the Huffington Post Good News section on May 26, 2016. I love the story … and the pictures.

This powerful image encapsulates one graduate’s overwhelming feelings of accomplishment and gratitude.

A photograph taken of Second Lt. Alix Schoelcher Idrache at his graduation from West Point went viral this week. Idrache, who was born in Haiti, has tears streaming down his face in the image.

“At this moment, I was overwhelmed with emotions. Three things came to mind and led to those tears,” Idrache explained in a comment on Instagram. “The first is where I started … The second is where I am … The third is my future.”

Idrache, who graduated at the top of his class in physics, was among 953 cadets who received a degree that day. And while the image is incredibly poignant, the story behind it is even more touching.

Idrache explained in his comment that his roots are in Haiti. While growing up there, Idrache saw U.S. forces on humanitarian missions, according to a press release. It was then he began dreaming of becoming a pilot.

“People where I’m from don’t grow up to be pilots right? They don’t dream of flying a helicopter, that’s not something you do,” Idrache said in a press release. “You don’t just say I’m going to be a pilot and make it happen. There’re no aviation, there’re no helicopters, no flight schools. There’re none of that.”

Idrache added in his Instagram comment that reflecting on his opportunities at West Point contributed to his tears on his graduation day.

“Men and women who have preserved the very essence of the human condition stood in that position and took the same oath,” the recent grad wrote in Instagram, astounded by his current position as a West Point grad. “Men who scaled the face of adversity and liberated Europe from fascism and Nazism. Women like Cpt. Griest, Lt. Haver, Maj. Jaster who rewrote the narrative and challenged the status quo to prove themselves worthy of being called Rangers.”

As for the future, Idrache’ll attend the Army Aviation Center for Excellence at Fort Rucker, Alabama, in July.

“Knowing that one day I will be a pilot is humbling beyond words. I could not help but be flooded with emotions knowing that I will be leading these men and women who are willing to give their all to preserve what we value as the American way of life,” he wrote. “To me, that is the greatest honor. Once again, thank you.”

Now, isn’t that one great Happy Saturday story? Have a great weekend especially my American friends. Have a great Memorial Day weekend!

Remember this though – have a great weekend but don’t forget to say thanks to all those who died in active military service. They made the ultimate sacrifice.

You know, writing is a tremendous source of self expression and development. It’s fun! Anyone can do it. Click the banner below to find out more –