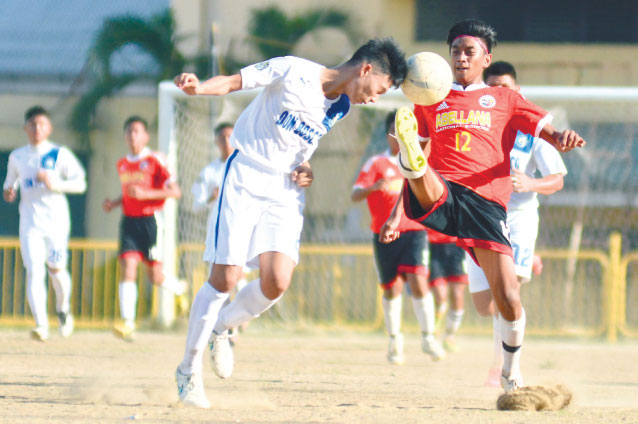 Published by Stephen Bentley on November 21, 2015

You will all know I watched the first day’s play in the Philippines  Football Federation Regional Under 22 Play-Offs. I thoroughly enjoyed it. Today I returned for the third and final day anticipating quite a ding-dong match between the two best, and physically strongest, teams Cebu and NOFA (Bacolod). It was disappointing.

I don’t blame the young men who were playing. It was their third match in the space of three days. That was far too much to ask especially in temperatures of about 30C. In fact, it’s ridiculous to ask players to perform like that in three consecutive days. They had to cope with a hard, bobbly pitch, high temperatures and an even stronger wind than on Thursday. It was all too much for tired and aching limbs.

Therefore, it wasn’t the entertaining football I had watched two days previously. The fussy refereeing certainly played its part today in making it an unattractive spectacle. The best referees are those you don’t see or hear and that certainly was not true of today’s man in the middle.

However, the real problem was the tight schedule and I do believe that the Philippines Football Federation should take a close look at that for the future. It is not only the players that suffer but also the game is demeaned, in that there will have been spectators there today who may never return to football again. The sport cannot afford that in a basketball-mad Philippines.

Jurgen Klopp, the Liverpool Manager, recently criticized the English F.A. for allowing one of his young players to play three games in five days whilst away on England duty. He was quoted as saying, “Three matches and five days is the reason why he is now injured.” He went on to complain that the English F.A. were treating players like “horses.” So if that sort of tight schedule is unacceptable for professional players then it is surely even more unacceptable for the amateurs in these Under 22 Play-Offs.

The day had its plus points. Firstly, I found out that the # 32 Paul Ogar (not Decena) of Cebu was not as effective against a better team. He was not given the freedom against Bacolod to boss the game like he did on Thursday. That doesn’t make him a bad player, but he has a lot to learn. His long raking passes weren’t on display today and I can only recall one attempt. It was hopelessly overhit.

Dutosme, the wide player of Bacolod, I mentioned in my previous post, was again displaying some great skills until he faded in the second half. I think he was feeling the effects of a heavy tackle near the touchline closest to me. It was one occasion when the fussy ref should have shown a yellow card to  the offending Cebu defender but no!

The other NOFA (Bacolod) player I have to mention is Usman. He is a tall striker with talent. I have to add that his attitude needs to change if he wishes to really make progress in football. Too often today, he was guilty of remonstrating with the referee and even his own bench at one stage. All these gestures and theatrics he employed today, have no place in amateur football. It’s a shame as he has talent and having spoken to him albeit briefly, he seems a nice guy. Cut it out!

The greatest improvement from Thursday was in the shooting of the Cebu team. Maybe they had read my post! They also tightened up in midfield with Ogar playing as a holding midfielder especially in the first half. The two wide men also dropped back to give more numbers in the middle of the park. Perhaps the coach had been listening to me!

The biggest plus point was again bumping into the Cebu coach, Eleazar again before the game as I managed to get his contact details. This is a guy who, like me, loves his football and I look forward to staying in touch with him.

Yet another plus point of me blogging about these Regional Play-Offs is that I received a request, via Facebook, to coach a team in Bantayan. Seeing I love Bantayan and love football, I may slip over there and help out.