Published by Stephen Bentley on June 8, 2016

It’s a wobbly day today! My old friend Jack recently reminded me I was in the habit of saying that phrase when we  were both young and stupid. Now that I am old and stupid, I must confess I had forgotten about it until reminded.

It meant nothing. It was one of those silly sayings that friends use between themselves for a giggle.

But I was surprised when I looked up the word in Merriam-Webster. I had no idea that it had another meaning:

Definition
plural Wobblies
: a member of the Industrial Workers of the World

For once I take my hat off to the Urban Dictionary (and Gwen) for enlightening me:

wobbly
A member of the once-powerful syndicalist union, the Industrial Workers of the World. They are in favour of revolutionary unionism and see authoritarian control (such as bosses and politicians) as oppressive. Many wobblies subscribe to some form of anarchism.
The wobbly was outnumbered at the meeting by liberals who prefered to work with the bosses instead of in opposition to them.
by Gwen July 25, 2003 That is the Google search result right at the top of the page one of the results. I love the “Translate wobbly” button. How cool is that? 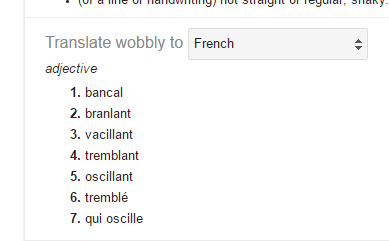 That is Word Wednesday Fun 🙂

Let’s also try Filipino for my friends and family here in the Philippines: 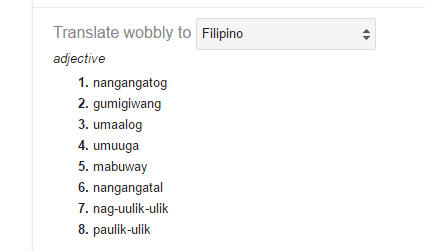