Published by Stephen Bentley on December 28, 2016

Hogmanay is a Scottish word and denotes New Years Eve and associated with a good few ancient traditions such as “first footing.”  Note my use of the word “Scottish.” Nothing is more infuriating to a Scot, or this Brit with Scottish blood, than the use of the word Scotch in place of Scottish or Scot. Scotch is the drink!

Rampant Scotland is where I found this information about the word Hogmanay:

What does Hogmanay actually mean and what is the derivation of the name? Why do the Scots more than any other nation celebrate the New Year with such a passion? Why should a tall dark stranger be a welcome first foot visitor after midnight, carrying a lump of coal and a slice of black bun?

While New Year’s Eve is celebrated around the world, the Scots have a long rich heritage associated with this event – and have their own name for it, Hogmanay.

There are many theories about the derivation of the word “Hogmanay”. The Scandinavian word for the feast preceding Yule was “Hoggo-nott” while the Flemish words (many have come into Scots) “hoog min dag” means “great love day”. Hogmanay could also be traced back to the Anglo-Saxon, Haleg monath, Holy Month, or the Gaelic, oge maidne, new morning. But the most likely source seems to be the French. “Homme est né” or “Man is born” while in France the last day of the year when gifts were exchanged was “aguillaneuf” while in Normandy presents given at that time were “hoguignetes”. Take your pick!

In Scotland a similar practice to that in Normandy was recorded, rather disapprovingly, by the Church.

“It is ordinary among some Plebians in the South of Scotland, to go about from door to door upon New Year`s Eve, crying Hagmane.”
Scotch Presbyterian Eloquence, 1693.

Historians believe that we inherited the celebration from the Vikings who, coming from even further north than ourselves, paid even more attention to the passing of the shortest day. In Shetland, where the Viking influence was strongest, New Year is called Yules, from the Scandinavian word. 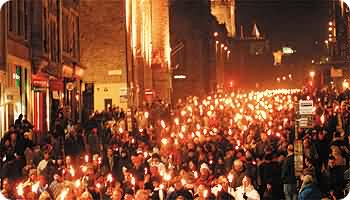 It may not be widely known but Christmas was not celebrated as a festival and virtually banned in Scotland for around 400 years, from the end of the 17th century to the 1950s. The reason for this has its roots in the Protestant Reformation when the Kirk portrayed Christmas as a Popish or Catholic feast and therefore had to be banned. Many Scots had to work over Christmas and their winter solstice holiday was therefore at New Year when family and friends gathered for a party and exchange presents, especially for the children, which came to be called hogmanay.

There are traditions before midnight such as cleaning the house on 31st December (including taking out the ashes from the fire in the days when coal fires were common). There is also the superstition to clear all your debts before “the bells” at midnight.

Immediately after midnight it is traditional to sing Robert Burns’ “For Auld Lang Syne”. Burns claimed it was based on an earlier fragment and certainly the tune was in print over 80 years before he published his version in 1788.

An integral part of the Hogmanay partying, which continues very much today, is to welcome friends and strangers, with warm hospitality to wish everyone a Guid New Year. The underlying belief is to clear out the vestiges of the old year, have a clean break and welcome in a young, New Year on a happy note.

“First footing” (that is, the “first foot” in the house after midnight) is not as common as it used to be in Scotland. To ensure good luck for the house, the first foot should be male, dark (believed to be a throwback to the Viking days when blond strangers arriving on your doorstep meant trouble) and should bring symbolic coal, shortbread, salt, black bun and whisky. These days, however, whisky and perhaps shortbread are the only items still prevalent (and available).

“Handselling” was the custom of gift giving on the first Monday of the New Year but this has died out.

The magical Firework display and torchlight procession in Edinburgh – and throughout many cities in Scotland – is reminiscent of the ancient custom at Scottish Hogmanay pagan parties hundreds of years ago.

The traditional New Year ceremony of yesteryear would involve people dressing up in the hides of cattle and running around the village being hit by sticks. The festivities would also include the lighting of bonfires, rolling blazing tar barrels down the hill and tossing torches. Animal hide was also wrapped around sticks and ignited which produced a smoke that was believed to be very effective to ward off evil spirits. The smoking stick was also known as a Hogmanay.

Some of these customs do continue, especially in the small, older communities in the Highlands and Islands of Scotland where tradition, along with language and dialect are kept alive and well. On the Isle of Lewis, in the Outer Hebrides, the young boys form themselves into opposing bands, the leader of each wears a sheep skin, while a member carries a sack. The bands move through the village from house to house reciting a Gaelic rhyme. On being invited inside, the leader walks clockwise around the fire, while everyone hits the skin with sticks. The boys would be given some bannocks – fruit buns – for their sack before moving on to the next house.

One of the most spectacular Fire ceremonies takes place in Stonehaven, just south of Aberdeen on the North East coast. Giant fireballs, weighing up to 20 pounds are lit and swung around on five feet long metal poles, requiring 60 men to carry them as they march up and down the High Street. The origin of the pre-Christian custom is believed to be linked to the Winter Solstice of late December with the fireballs signifying the power of the sun, to purify the world by consuming evil spirits.

And it is worth remembering that January 2nd is a holiday in Scotland as well as the first day of the year – to give us all time to recover from a week of merry-making and celebration, all part of Scotland’s fascinating cultural legacy of ancient customs and traditions surrounding the pagan festival of Hogmanay.

So, there you have it and I wish you all a Happy New Year!