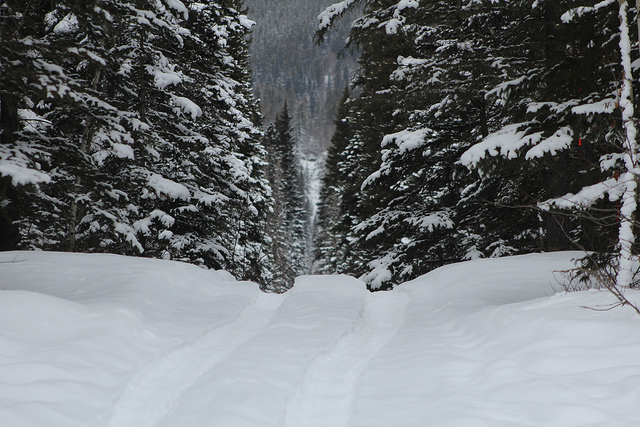 Published by Stephen Bentley on January 8, 2016

The latest in the #FavFotoFriday series, and I decided to look outside of my Flickr collection for today’s topic – Snow in Canada. The main reason no Canadian photos are ion my Flickr albums is that back then I didn’t have my dependable Canon camera and lenses.

Why this sub-title? I used to visit Toronto frequently when my brother was alive and living there. The trips I made were often in the winter. As I’m sure you know, winters can be cold and harsh in Canada.

I recall flying out to YYZ on a British Airways flight, Toronto-bound but then it was flying on to Chicago. On the approach to Lester Pearson airport, the British pilot announced in that typical calming voice, that it was forecast to be minus – 30 C (yes, Celsius including the ‘wind chill’ factor) on the ground at Toronto at a scheduled landing time of 3 pm. Two Chicago residents, sat behind me, exclaimed “Jeez!”

Chicago is known for its cold winters too, so I guessed that the outcry from the guys behind me meant it was bitterly cold!

My brother arrived late at Toronto airport. I waited near to the large sliding glass doors. The ones that swoosh automatically open on a movement detector sensor. I soon moved. Every time that door opened it was like being cut open by freezing surgical steel without anesthetic!

Once you wrap up against the weather, it is tolerable, and I got to like it. I loved the crisp, clear days with cloudless blue skies. It was a dry cold unlike the damp chill of England. However, the temperatures did fall to extremes not witnessed in England. There was also plenty of snow!

The other thing you soon notice about Toronto and snow is how efficiently they deal with it. A snowfall of 6″ – 9″ is common. However, the snow blowers and plows soon clear the roads and the mall parking lots. Initially, it was a strange sight for me to see a mini-mountain of snow on a mall lot, blown there by the snow-blowing truck. A contrast to England when less than ¼” of snow fell and the trains stopped running. British Rail notoriously stated, “It was the wrong kind of snow on the tracks!”

One thing I did not like about the snow was snow shoveling!  Here I am below helping out my brother outside his home. I felt guilty leaving it all to him. It’s a local law that the householder must clear the snow outside his home.

The snow and bitterly cold temperatures have benefits too.

One of my most memorable and pleasurable weekends ever was spent north of Toronto in a log cabin. My brother and a few friends stopped off at Bracebridge on the way to the cabin.  It was a boys’ weekend trip. The cabin was on the shores of Skeleton Lake. It was a cold January day, and Bracebridge was deserted. We found a tavern in the town to have lunch and a beer. On entering the inn, it was deserted save for two locals drinking at the bar. It was a surprise to me that after about one hour a stripper suddenly appeared to do her thing. I believe that she had more cold weather induced goosebumps than there were people in that town!

Leaving Bracebridge, we turned off the highway down what would have been a dirt road in the summer but was now solid with ice and packed snow. I guess we drove about one mile before coming to a clearing that would serve as a car park. It was impossible to get nearer to the cottage in a car owing to the snow and thick forest.

It was still a mile or so to the cottage, and one of the guys walked. He returned riding a Ski-Doo. What a great machine!

They are fun! After settling into the cottage, we decided to ‘go to the pub.’ It was about 7 miles distant and only reached by Ski-Doo by way of narrow, snow-packed pine forest trails. The last mile was along the highway.

We had 3 of these machines at our disposal. After nightfall, all six in the group traveled to the pub, one rider one pillion passenger per machine.  Like the alliteration? I rode pillion behind my brother on the way there. I have never experienced cold like it. My tear ducts flooded owing to the cold wind that we cut through on the trip. My nostrils flowed with mucous. Both tears and mucous froze instantly on my face. I was continually snapping off the frozen ‘kee’ and throwing it away until the next formation. No wonder that the first orders in the pub were a beer and a whiskey chaser!

The ride back was fun too, or at least for me. I was permitted to ride the Ski-Doo on the return leg. I was doing fine until a race developed between another guy and me. I took a sweeping bend on the narrow trail a tad too fast. My machine started to climb a tree! Fortunately, no one was hurt, and the damage to the Ski-Doo was cosmetic.

The remainder of the trip was spent ice fishing. The lake was frozen over to the depth of about 18″. It withstood the weight of both man and machine. One of the guys showed me how to bore a hole in the ice and set up the fishing rod. You are able to see the core of ice being lifted in the photo above.  It was both fun and educational.  The large lake was sparsely populated by the local experts. They erected a small hut over the hole in the ice with a paraffin heater to prevent the lake freezing over again. The fish weren’t impressed. I didn’t see any!

The next morning was the last day. I was sent out to fetch water from the pump outside. The source of water must have been below the permafrost line as the pump worked. As I left the cabin with two empty pails, I hadn’t realized that there had been new snowfall overnight. I plunged waist deep into the fresh snow!

Snow and winter in Ontario means a not-to-be-missed opportunity to see Niagra Falls. It’s a true winter wonderland. I drove my brother’s Jeep Cherokee there a few times when he was working. On one occasion the snow was driven horizontally by a strong wind and I got to truly know the meaning of the phrase ‘white out!’

The events of that weekend at Skeleton Lake will always be a fixture in my mind; all the more since the passing away of Peter, my brother.

I loved the solitude of it in the winter. While there, I often dreamed of returning to write a book locked away in that cabin with a log fire,  whiskey, laptop  and loving memories of my brother to keep me company. Maybe one day eh? That’s the Canadian ‘eh’!

Next time I will make sure of better photos and take my Canon camera and lenses with me.